Amanda noted we did not get picked for the Arts in the Park projects and will explore other possibilities. She will be looking into various grant options like Small Sparks and Neighborhood Matching Funds. Kathleen suggested that any money LSCC had agreed to set aside from our parks fund for signage in Licton Springs Park might be redirected as matching seed money for the Arts or event projects Amanda is thinking of.

Melanie noted that Epic Life Church might do another Celebrate North Seattle event. It might be good to invite someone from the church to our next meeting. She also discussed ALUV efforts to do a zoning change from commercial to neighborhood-commercial.

Melanie noted the Aurora pedestrian bridge artwork is now up and the daffodils planted there will soon be blooming.

Kathleen noted that City Council District Five candidate John Lombard had indicated a desire to be at one of our meetings and the group noted he is welcome to come and listen but we have not had a tradition of inviting candidates in for their campaign promotions. Kathleen will email him.

Next meeting is our general membership meeting March 20. 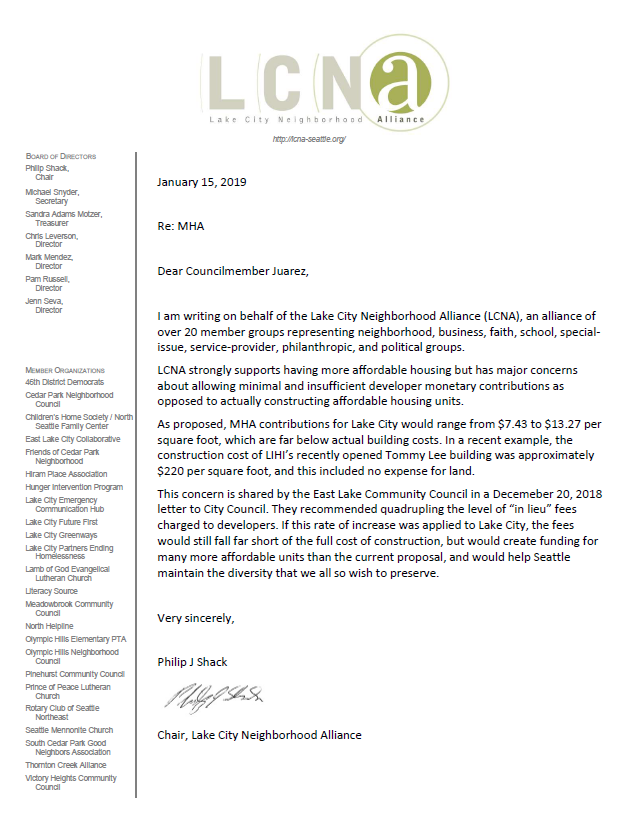 Next meeting March 20, 2019 6:30 PM This is our annual General Membership Meeting according to Article VI of our by-laws. Kathleen needs to post the notice to our email list no later than March 10 of the meeting. There are annual President's and Treasurer's Reports given at this meeting VI-2) and it is at this meeting when we nominate people for positions. Terms are up in March for: Thomas Stachiw, Kathleen Braden, and Amanda Culp-Crosley (who replaced Rose Whitson)